Since 2014, Data Axle has provided data, technology and agency services to Silver Star Brands, one of America’s largest direct-to-consumer companies, as it continues its transformation from a mail cataloguer into a true multi-channel retailer. Silver Star Brands consists of six brands selling gifts as well as health, wellness, and household products: Miles Kimball, Walter Drake, Easy Comforts, Personalized Things by Exposures, Native Remedies, and As We Change.

Silver Star Brands’ target market is women aged 50 and over and they reach 120 million U.S. households. They had traditionally used the display channel to acquire new customers but not to reactivate existing ones.

Data Axle suggested testing display advertising as a means to re-engage Silver Star Brands’ inactive subscribers. The insight from this approach would then be used to evaluate the effectiveness of the display channel and inform future marketing program strategies.

Silver Star Brands chose the Miles Kimball brand for a four week test during the holiday season and used the following banner ad that offered 10% off and free shipping to incentivize consumers to re-engage.

The audience selected for the display ad campaign met the following criteria:

These criteria yielded an audience size of 647,700 inactive email subscribers who were still part of Miles Kimball’s email program. 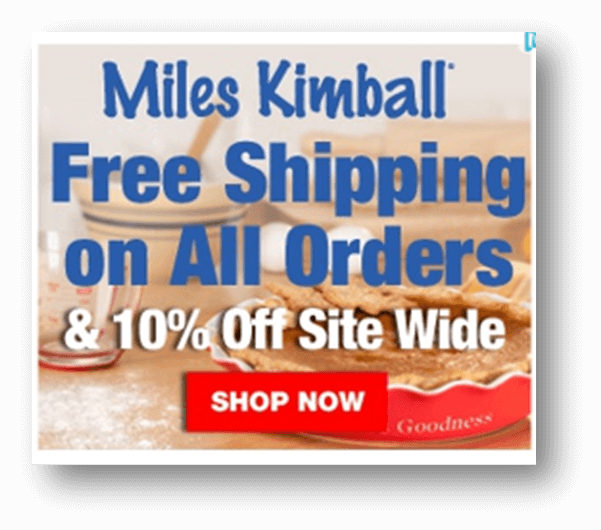 After the audience was identified, Data Axle reviewed the file and enhanced it with additional online and offline data which resulted in more complete and accurate information for 264,000 records from the initial 647K audience. This process also improved the likelihood of each audience member to be matched to a consumer ID, which would enable Data Axle to target that consumer with display ads. Ultimately, Silver Star Brands’ audience file yielded a 64% overall match rate – a dramatic increase over the 50% industry average. The remaining 36% of the initial audience which were unmatched and thus could not be exposed to the display ad became the control group against which Data Axle would benchmark the performance of the matched segment.

This enabled Data Axle to go beyond the traditional ad serving metrics like ad clicks, viewability, revenue generated, and Return-on-Ad-Spend (ROAS) and analyze cross-channel engagement and purchase behavior for both the matched and unmatched audience segments. This allowed Data Axle to provide a complete view of audience response that shed light on key business questions including:

We are very encouraged by the results from this integrated cross-channel campaign. We will continue to expand our activities with Data Axle and look forward to optimizing our activation and reactivation programs.”

increase in sales from those in the test group that had not previously purchased vs. those in the control group

ROI for the display ad test

The display channel was successful in driving engagement from inactive subscribers that could no longer be reached through email.

This opened up major opportunities for Silver Star Brands to reach subscribers who have been inactive for over 12 months, instead of spending a huge amount of their budget on cold acquisition. For many companies, their inactive segment is twice the size of their mailable audience and converting just a small portion of this group could have a major impact on revenues.

The audience segment that was exposed to the display ad generated significantly more cross-channel purchases than the segment that could not have seen the ad so the proof of concept effectively proved that dynamic 1:1 ad serving drives the best performance for different segments of inactive subscribers.

Have a question? Reach out.

Deliverability FAQs in a time of uncertainty
These uncertain times come with rapid changes to email communication plans, some of which can drastically affect email deliverability. While there are a wide variety of unique scenarios and questions to address, we’ve summarized a few common questions and scenarios for you below
Learn more
whitepaper

2020 Digital marketing trends
To help marketers set goals and plan for 2020, we spoke with seven experts at Data Axle to get their take on some of the most burning questions and trends brands will be asking about in 2020.
View whitepaper
[class^="wpforms-"]
[class^="wpforms-"]