Marriott International, Inc. has been a leader in the hospitality space for more than 80 years by listening to what customers want and staying attuned to their behavior. This has led to innovative developments, including some full-blown transformations, at Marriott’s more than 4,100 properties spanning nearly 79 countries and territories across the globe.

Data Axle has partnered with Marriott Rewards®, Marriott’s loyalty program, to ensure that innovation continues in their email marketing initiatives. In early summer 2014, as part of Data Axle’s strategy team’s Q4 planning, they conducted a historical analysis of Marriott Rewards’ email program performance from Q4 in both 2013 and 2012 and identified content and communication opportunities in the marketing plan for that upcoming quarter.

The team found that bookings were consistently lower in the month of December suggesting a seasonal travel trend. Furthermore, email communications sent in December generated the lowest click rates and the least revenue out of any month in both 2012 and 2013. However, open rates remained steady throughout Q4, including December, indicating members were still showing interest in hearing from Marriott Rewards.

While some thought December was a month to pull back on messaging due to low bookings, Data Axle recommended Marriott Rewards take a novel approach to its holiday email marketing program. Instead of advertising promotional offers as they typically would, Marriott Rewards was advised to focus on boosting engagement through member-centric, value-added content. This approach would enable Marriott Rewards’ communications to stand out among the typical holiday shopping clutter and competitive messaging. For further relevancy, the content and communication strategy was fueled by leveraging end-of-year consumer trends, cultural zeitgeist, and program timing.

Email has been one of the most successful vehicles for Marriott Rewards to maintain an active and relevant conversation with members. Since partnering with Data Axle, Marriott Rewards has expanded its lifecycle communications to further engage and retain customers. In addition to increasing the volume of emails, Marriott Rewards has focused on incorporating personalized and editorially curated content in messages to enrich the member experience. Based on Data Axle’s strategic guidance, Marriott Rewards launched an integrated program with an overarching “Year in Review” storyline in December 2014. Its objective was two-fold:

Then, Marriott Rewards used an annual message from Bill Marriott, Jr., Former CEO and now Chairman of the company, to express gratitude towards its members and highlight the offerings the company rolled out in 2014.

Marriott Rewards later incorporated Year in Review modules in other communications, which reinforced the gratitude and program review elements that were critical components of the Year in Review concept. 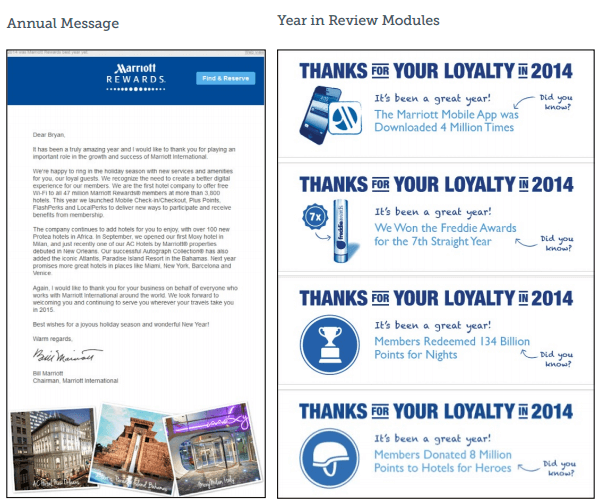 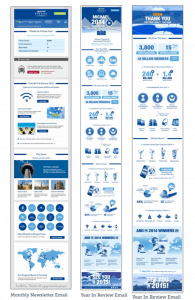 The Year in Review program made up of 8 total touchpoints culminated with a dedicated email that focused the spotlight on all that Marriott Rewards and its members accomplished in 2014. Data Axle’s Creative group designed the mobile-friendly email and landing page that housed a personalized video, which the team also storyboarded and directed.

The personalized videos visualized 4 million members’ travel activity throughout the year, such as number of stays at various Marriott properties, then recounted the new hotels that opened in 2014 to encourage customers to envision their many travel options in 2015. The top of the email had a ‘play’ button to encourage click-throughs to the video page while the body of the message, an infographic, contained a single content block that showcased the annual growth Marriott experienced but kept the focus on customers in subsequent sections by showcasing members’ favorite cities and activities to redeem points on during the year. The Year in Review email closed with a fun “See you in 2015!” animated GIF. 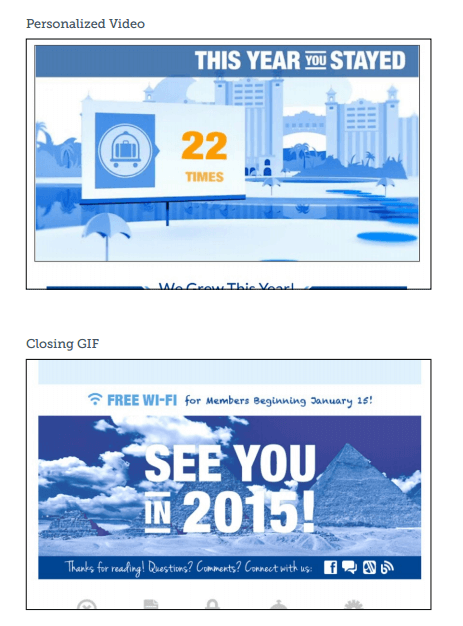 A Program to Remember

All in all, Marriott Rewards’ Year in Review program showed that it’s possible to boost engagement and, in Marriott Rewards’ case, bookings at the end of the year—if you provide value through member-focused emails and tie multiple touchpoints together with a consistent theme.

“This is an example of how a cohesive storyline, personalized content, and innovative execution deliver greater value and relevance for members. Through the Year in Review program, we were able to leverage individual members’ key accomplishments to drive re-engagement.”

In December 2014, the click-to-open rate increased 20% year-over-year and Marriott Rewards generated 86% more revenue than in December 2012 or 2013. This increase was, in part, due to the final email in the Year in Review program, achieving three times the December average of revenue per delivered message. What’s more, the end-of-year campaign contributed to Q4 results as it was Marriott Rewards’ most successful fourth quarter over the past three years, generating the third highest email-influenced revenue of any quarter. The fourth quarter also resulted in a 9.7% year-over-year increase in conversion rate translating into a 30.9% boost in bookings and 38.8% jump in revenue.

“The Year in Review campaign was the single best execution of an end-to-end campaign we have done since I have been at Marriott. This could not have been accomplished without Data Axle; their in-depth insights, meticulous planning, innovative communication strategy, and exceptional creative storyboarding were at the helm of Marriott Rewards’ success in Q4 as a whole and specifically, the month of December. The collaboration that led to the innovative Year in Review program has us looking forward to the future.”

Seasonal Campaigns that Lead to Conversion: Why Marketers Shouldn’t Forget about Father’s Day in 2016
It’s second nature for marketers to tie in holiday-themed messaging into their marketing campaigns but by focusing solely on the big holiday season, marketers miss out on opportunities to engage consumers year-round
Read more
webinar

Predictive Marketing: a Framework to Recovery in a COVID-19 World
As the world starts to recover from the impact of COVID-19, companies across industries are in need of actionable plans to help them adjust to the long-term changes in their space.
Watch now
Have a question? Reach out.